This arcade machine is aimed at the Robotron fan !  It is just a particular version of our custom machines but as a popular item it gets its own page.

You would get all the benefits described here if you order a Robotron panel with any of our machines. 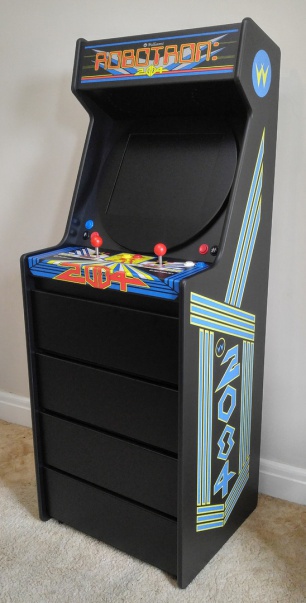 Robotron is another classic game from the Williams/Vid Kidz stable.

It is very playable on a standard fighter panel and feels prety good as long as the joysticks have a circle gate. But there are a lot of fans of Robotron who don't particularly want to play fighting games, and they appreciate a control panel with symmetric joysticks, and the feel and accuracy of a joystick with grommet centering and leaf switches.

Original Wico leaf sticks are available refurbished, or we also make our own grommet leaf stick with the addded feature of quick swap restrictors. This means that eg the left hand stick can be modified with the correct feeling restrictor for other games.

The screen and controls are the same size and in the same position as on the original Robotron  cabinet, but using an LCD screen means it is smaller and lighter than the original. At around 75kg it has enough weight to be stable but it is also quite manageable which is not something you can say about the original.

With the addition of two buttons per joystick on the RobotronPlus4 control panel you can also play many other one player and two player games, eg:

We've spent a lot of time researching and tweaking the emulation system to ensure top end performance, which is important for such a fast and responsive game. Note that Robotron does not play correctly on many of the jamma boards such as 19in1.

On the menu you will find various named settings (eg TGTS, VKE - VidKidz Extreme). This means you don't have to keep adjusting the settings, and each version has its own permanent high score table.

For prices please see these pages:  Prices, Example Builds   ,  How to Order